The Democracy Machine – A Report 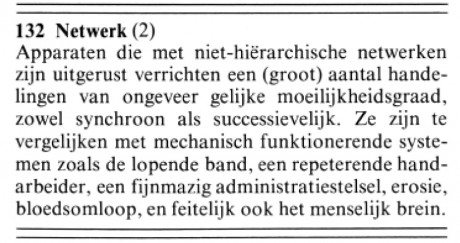 It was far, far, into the future, although not thát far into the future, when the Democracy Machine was first used. The future was as you would imagine it to be: human teleportation was invented (but caused a lot of accidents), buildings were extremely high (the closer you lived to the ground, the more you paid) and everybody had a microchip implanted in their brains.

Certain things hadn’t changed. There was a lot of quarrelling about the efficiency of the infrastructure, the quality of educational system, and crime rates were steadily on the rise. The two presidential candidates were each other’s polar opposites, and every day politicians appeared on television to take back everything they said the day before.

When in a certain part of the country a long drawn-out dispute about the construction of a bridge or a tunnel accusations of nepotism were uttered, the first test with what is now known as ‘the Democracy Machine’ was carried out. The microchips in the brains of the local citizens were connected to the measuring Machine, and that night the question – bridge or tunnel- was silently sent to their brains. The Machine measured activity in the brain-areas harbouring logic, experience and empathy, while switching off the area for self-interest. The results were very clear and when the next morning people woke up to the sound of governmental cranes building a bridge, they knew: this was the people’s choice.

Over the following weeks the Democracy Machine was used more often and more elaborately. Infrastructure improved drastically and long-disputed matters such as the permission to track down criminals via the microchips were approved of overnight, which caused a tremendous sense of relief among the people. During the subsequent nightly referendum the president was deposed, something he himself also voted in favour of.

Every night criminals were brought before the jury of sleepers, tried and sentenced. Fears people had, about subconscious prejudices or hidden undercurrents of hate, turned out to be unfounded. When self-interest, self-image and fear were taken out of the equation, people turned out to be very capable of passing well-balanced judgement. The microchips were also used to carry out the punishment; it would send an electromagnet pulse through the offender’s brain: a short one for temporary loss of consciousness, a longer one for suspended coma, or –seldom- a full one-minute pulse for final shut-down of the brain.

At last, the people ruled the country. The Democracy Machine was perfected to the model I have here in front of me: it is in its totality not bigger than a small desk. It operated completely synchronous with the people’s minds. If a large number of people encountered the same problem, the machine registered this and formulated a question, which was sent out to the microchips at night. The answers that the people sent back were immediately implemented. New laws were formulated and spread through brain-communication, all the sharp corners were sanded by governmental grinding machines, every inconvenient or time-consuming system was made efficient. Even complex mathematical problems were solved in an instant by the superior symbiosis of brains and were immediately added to the online educational system.

So what went wrong?

Maybe it was the contrast with their surroundings, that became more and more streamlined and flawless, that caused the matter to rise up within the people’s minds like it did. The Machine, that much is certain, was just doing its job: it registered the peaks in loathing that arose when people thought of themselves. This happened most often when people were alone, but also when they heard themselves talk or when they entered a room full of people they didn’t know. But the highest peak was indisputably in the morning, when everyone looked in the mirror.

The unuttered question was registered by the Machine, and transformed into a question, which it sent back to the people at night.

The result, a pure, impartial answer, completely devoid of self-interest, was sent back to the Machine and that was how the people sentenced themselves. The next morning, not one of them woke up.